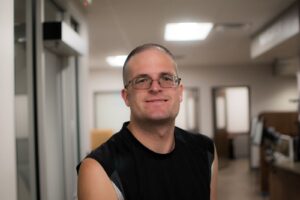 In today’s labor market, it is not uncommon for employees to leave one business for another. Some may work for an organization for a year or two, others may only work for a single season. As a testament to his dependability, Robert White has worked for Lillie Rice Center for more than a decade. Knowing Robert for this time, Christine Daudt, the executive director of Lillie Rice Center, describes him as “an extremely diligent and compassionate person. He is committed to always doing the right things at work, and he never hesitates to offer a helping hand.” In the summer of 2019, Robert began employment at TMACS. There, he worked with Kade as a morning custodian, cleaning and resetting the restaurant on a daily basis.

Robert seeks another position in Walla Walla where he works between ten and twenty hours per week. Though there is no conceivable work environment in which Robert will not thrive, he performs his best work in hands-on scenarios. From custodial to food preparation, data entry to customer service positions, Robert works tirelessly to complete all jobs to the highest quality.

When not at work, you will likely find Robert at a bowling alley. Though Robert is not one to brag about his abilities, there’s nothing modest about his bowling skills: He has scored countless turkeys and routinely earns north of 250 points. Robert has also skied competitively for over a decade. As a proud Olympian, he has earned enough medals to fully cover two cork boards, many of which dangle over each other. Above all, Robert is a courteous, kind, warm individual who would make a great addition to any business. Contact BMI at (509) 525-5433 to meet Robert.